A new option for the treatment of diarrhoea

and detoxification of the body

A new option for the treatment of diarrhoea and detoxification of the body.

Based on 400 mg hydrolysed lignin.

Diarrhoea is defined (WHO) as the passage of three or more loose or liquid stools per day (or more frequent passage than is normal for the individual). Frequent passing of formed stools is not diarrhoea, nor is the passing of loose, “pasty” stools less frequent than twice per day. Diarrhoea is distinguished by specific symptoms (it can be accompanied by abdominal cramps, fever, nausea, vomiting, fatigue and emergency state, bloating, ejection of stool of greater volume), as well as by the severity of symptoms and the length of duration.

Diarrhoea is a disease that is a second leading cause of death of children under the age of five, and it is responsible for more than 700,000 child deaths each year. Majority of people actually die of severe dehydration and loss of fluid (water and electrolytes).

Possible mechanisms of diarrhoea are:

There are many causes that lead to diarrhoea:

What is “Travellers’ diarrhoea”?

It is an intestinal infection caused by the consumption of contaminated food or water – it occurs as a consequence of unsanitary handling of food (faecal-oral infection). The most common cause is enterotoxigenic E. coli, followed by other bacteria – Campylobacter jejuni, Shigella spp. and Salmonella spp. The viral pathogens that can cause it include Norovirus, Rotavirus, and Astrovirus. Giardia is a major protozoan pathogen found in the Travellers’ diarrhoea. It appears suddenly. The symptoms vary from mild cramps and urgent loose stools to severe abdominal pain, fever, vomiting, and bloody diarrhoea. Untreated bacterial diarrhoea lasts 3 to 7 days, the viral one 2 to 3 days, while the protozoan diarrhoea can last for weeks and months if untreated.

The treatment of diarrhoea

The standard treatment of diarrhoea includes oral rehydration and diet, while antibiotics are administered only in severe cases (vomiting, cramps, fever), bloody diarrhoea, and persistent diarrhoea that are resistant to the applied therapeutic measures. Metronidazole is used in diarrhoea caused by Giardia and other protozoa. The following are used as a support to the therapy: antipropulsives (Loperamide) – reduce intestinal motility, thereby slowing the pathogen excretion (not to be used by patients with fever and bloody diarrhoea), then probiotics and enterosorbents (activated charcoal and lignin).

Recommended usage is one dose 3-4 times a day one hour before a meal and/or taking other medications.

The dose depends on age and weight.

Dosage in children older than 12 and adults:

The recommended duration of the treatment is 3 to 5 days for acute infections and poisonings, and 14 to 21 days for allergies and chronic intoxications.

FILTRUM® can be used by pregnant and lactating women, as well as by children younger than one year of age (in consultation with a medical doctor).

The administration of FILTRUM® tablets in alcohol intoxication

In the treatment of alcohol intoxication, the product can be used with other medications, but also independently. Different doses are recommended depending on whether the case is prevention or a therapeutic use of hydrolysed lignin;

For men weighing more than 80 kg – 6 tablets taken at once;

For men weighing less than 80 kg and women – four tablets taken at once.

Antibiotics are not efficient against viruses!

EMA has banned the use of quinolone and fluoroquinolone antibiotics for the treatment of diarrhoea!

Frequent use of antibiotics creates resistance!

Loperamid is not efficient against bacteria and viruses!

Loperamide is contraindicated in Salmonella and Shigella infections!

BOULARDI is not efficient against viruses and parasites!

Comparative evaluation of the sorption of different enterosorbents in relation to clinically relevant bacterial species (Pereligin et al. 2011) – IN VITRO

Main characteristics and advantages of the application of FILTRUM® tablets: 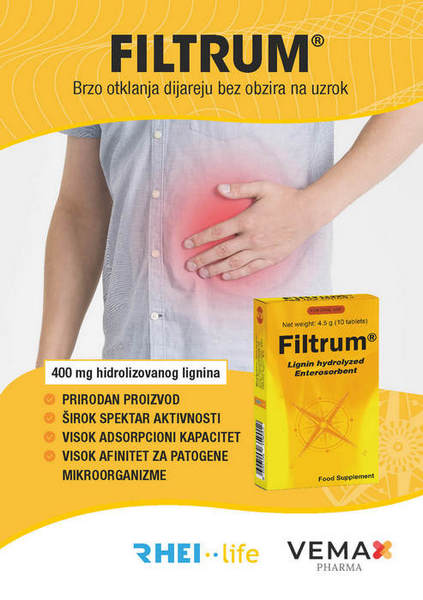