Vitamin B12 (methylcobalamin) in the form of a spray for oral usage.

Intended for children above four years of age. 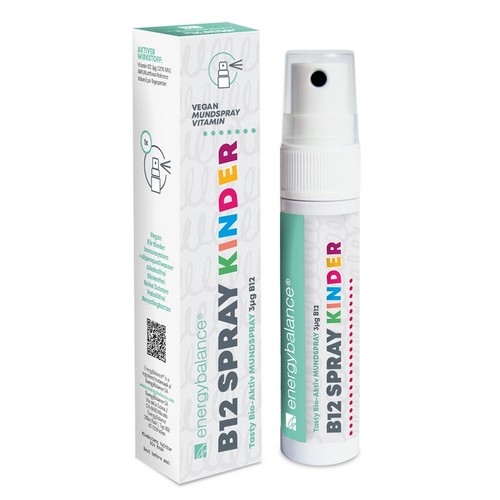 Vitamin B12 (cobalamin, cyanocobalamin, antipernicious vitamin) was first discovered in 1948. It belongs to the group of hydrosoluble vitamins. It is a red compound containing phosphorus and cobalt. The source of this vitamin is exclusively the food of animal origin – liver, kidneys, milk, meat, eggs, cheese, fish, and shellfish. Two main functions of vitamin B12 are the stimulation of growth and the stimulation of erythrocyte forming and maturing. The adequate intake of this vitamin contributes to the regular metabolism of proteins and amino acids, that is, to the synthesis of nucleic acids. Human body does not synthesise it, but it can be synthesised by intestinal flora. However, since it is absorbed only in the ileum, the final section of the small intestine, most of the so synthesised vitamin B12 is excreted through the faeces from the body. The biological activity of vitamin B12 is increased by probiotic bacteria and red beetroot.

Vitamin B12 is a rather large and complex molecule necessary for the process of development of all types of cells in the body. It is essential for the development and normal functioning of the brain and nervous system because it participates in the synthesis of myelin. It is significant for the synthesis of erythrocyte, growth of new cells, folate and homocysteine metabolism, DNA synthesis, and energy production.

The level of vitamin B12 is reduced in the body due to smoking, alcohol consumption, contraceptive pills, and use of diabetes drugs (oral medication for the control of diabetes mellitus), as well as due to various gastrointestinal diseases that lead to the reduction of the absorption of this vitamin in the small intestine. Nervous cells particularly suffer from vitamin B12 deficiency. According to the statistical data, between 5% and 20% of adult population have vitamin B12 deficiency and more than 40% have low levels of B12 in the plasma. The deficiency of this vitamin is particularly frequent in vegans and vegetarians, in persons that are infected with the Helicobacter Pylori bacteria, and in persons older than 65.

The causes of vitamin B12 deficiency can be divided into three groups:

Vitamin B12 – deficiency in children

During the first year of life, the amount of vitamin B12 depends on its amount in the mother’s body during the pregnancy. After the birth, the liver contains 25ųg of it, which is sufficient for the first year of life of an infant. Owing to that, problems related to the vitamin B12 deficiency in the mother can influence the level of this vitamin in the infant. The greatest increase in the vitamin B12 in children, according to the literature data, occurs in the period from 6 months to 3-7 years of age.

Apart from the adequate intake of the food rich in vitamin B12, additional need or deficiency of this vitamin in the body can be accomplished by supplementation. It is particularly significant for vegans and vegetarians that do not consume milk and eggs to take sufficient quantities of B12 in other available manners.

B12 supplementation contributes to:

The recommended use of the product

Children above the age of 4 – apply a single dose of the spray directly to the child’s mouth once a day. Shake the bottle with the contents before use.

The Reference Daily Intake (RDI) for vitamin B12 for adults (older than 14) is 2.5 µg. Applying the recommended daily dose of 1 spray directly into the mouth of the B12 Kinder product oral spray, 3.0 µg of vitamin B12 is taken, which is 120.0% of the RDI (reference daily intake) for vitamin B12.

Methylcobalamin was used as a source of vitamin B12 which is on the list of permitted sources of vitamins and minerals according to the Regulation on the safety of dietary products.

The recommended daily dose must not be exceeded. Food supplements cannot be used a substitute for a varied and balanced diet.

The product should not be taken by persons hypersensitive to some of the ingredients of the product. The product is not intended for children under 4 years of age, pregnant or nursing women. Keep out of the reach of children.

Store in the original packaging, away from the sun, light, and moisture at the temperature from 15ºC to 25ºC.

Support to the normal function of the nervous, immune, and gastrointestinal systems.

Does not contain alcoholSuitable for vegans and persons with vegetarian diet

Intended for the use of children aged four and older

Administration: One spray per day directly into the mouth